No surprise some serious hiking plans were made for our trip to Romania’s Carpathian Mountains. Only the weather sucked. But whatever, let’s get the hike on. Minus 1 degree, fog, but 4 layers of clothes and the new hiking boots would do the job.

At first we had to walk up like an ascent of 600 meters on a skiing slope.  So basically in the mud. On top of the hill the sun came out and the path got nicer. It lead us through forests and over meadows. Down to a lake that was covered in fog and back up. 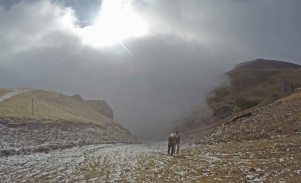 Walking up the skiing slope

… when the sun finally comes out

After a good 5 hours of hiking we decided to not go back down that skiing slope, but an “alternative route”, that was more scenic. Through a beautiful valley, hopefully taking us back where we came from. It started out good, but after 30 minutes we were covered in fog again, and since it was later afternoon already, we didn’t want to get lost. 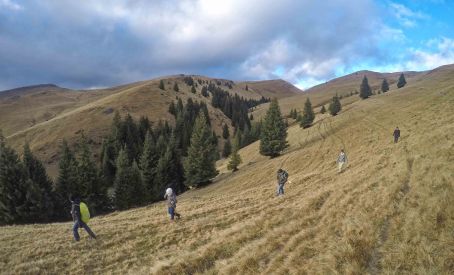 Hiking along the valley 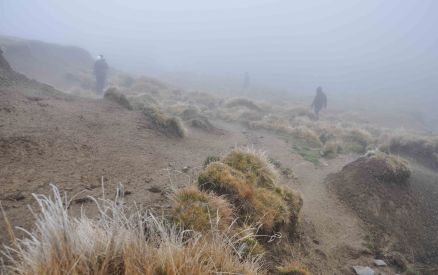 So we followed the markers, that lead us further into the valley, into the woods. Into the wild. The leaves and the grass were white due to frosting and ice and the fog made everything look mystical. The way went up and down pretty steeply and some minor climbing had to be done. I really enjoyed the route, except for the fact that it took us deeper and deeper into the hills and it started to get dark. 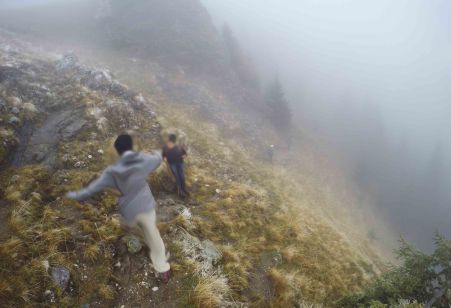 Deeper and deeper into the wild 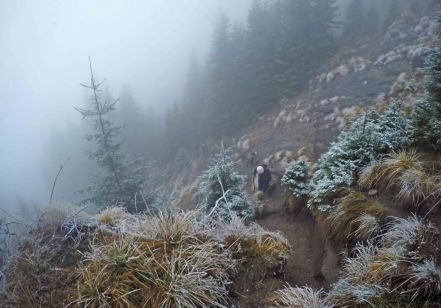 We tried to rush and to get out of this bitch before dusk – there were some really steep slopes that didn’t look too fun to hike during night time. Anyhow, in the end we didn’t make it out in time. Just before night fall we also lost track of the markers. We spread out a little, ran up and down potential paths to find the next sign that would guide us out of the wild. 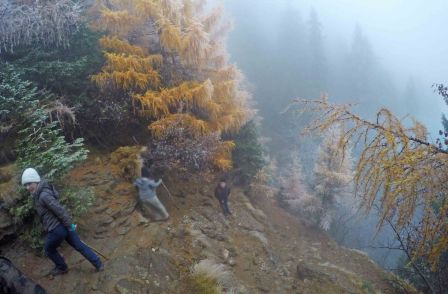 Hoping to make it outb before nightfall 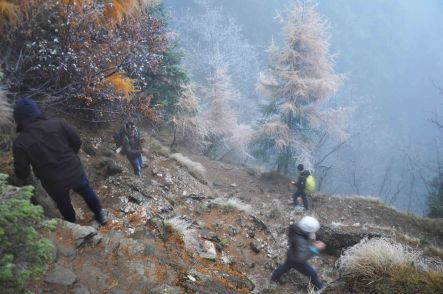 …but still enjoying the beautiful scenery

At this point all of us started to panic since we realized we wouldn’t make it, we’d be stuck in this forest and have to make it out somehow in the dark. Couldn’t even make phone calls. No clue where to go. What to do next. Should we go back  where we came from and try to find that one hut? Should we go off road and follow the GPS to what looked like a bigger path? A decision needed to be made since we had to keep moving or we’d started to freeze.

At this critical point, we somehow found the next marker on a tree. And the next. And then more. Also we experienced how valuable phone flashlights are. We stuck together really closely , and walked, climbed and searched our way through the night. Step by step. Marker for marker. Hour for hour. Full of adrenaline. Up and down. Out of breath. But after realizing how well the flashlights worked for us, our fear turned into optimism. We could do it as a group, just slowly and without any rush.

Stuck together with the phones in our hands we moved on in the dark woods, somewhere in Romania (where vampires are from – just saying), until after 2 hours we finally reached that skiing slope again. Felt relief and accomplishment. And happiness. And once again I got away. Made another sketchy and dangerous experience in the mountains and survived it. Learned another lesson. Another story to memorize and share with my grandchildren.