We are on a 4 day trail to Machu Picchu. We didn’t chose to hike the “Inca Trail”, since it might be crowded and with 500 Dollars very expensive. Also an alternative trail they offered we didn’t do in the end (although I was tempted) because it takes 5 days and you have to camp (apparently in tents that are made for people under 1.60 meters). Anyway, we booked the Jungle trail tour, that involves mountain biking, rafting, zip lining and hiking and will lead us to the famous Inca Ruins eventually.

On day one we drove up to 4200 meters to bike downhill for 52 km. When we reached the summit we were covered in a cloud and it started to rain after a few kilometers. Although I hoped and prayed it would get better the further down we rode – it didn’t. In fact it got worse and we all were drenched and cold. At the first stop I decided to stop it and rode down the rest of the distance in the van, together with Roxana and another person. 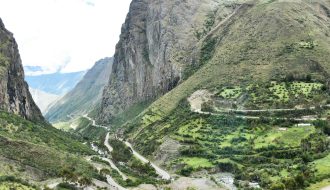 Good weather on this side of the mountain 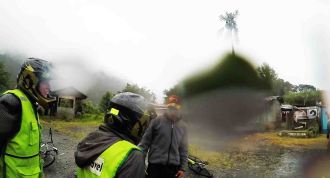 ….lots of rain on the other 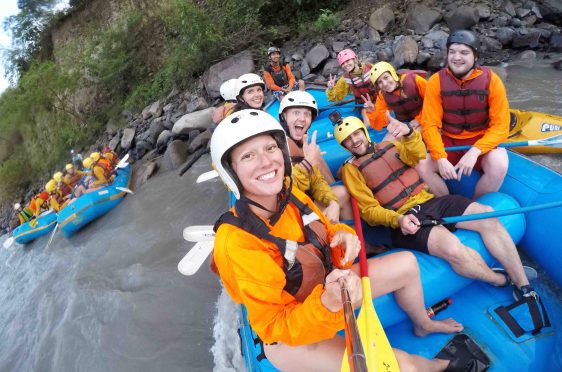 rafting on the Urubamba river

After lunch we set out to go rafting on the river Urubamba. The weather in the lower altitude is warm and it was quite fun. There weren’t any drops but high waves and rapids. And of course nice surroundings. All in all so far I am thinking maybe I should have done the Inca Trail since I realizing that hiking is just more of my thing. Let’s see what the next days will bring……

…… Today we hiked along jungle paths and parts of the Inca Trail. But in fact there is no such thing as THE Inca trail but several ones. There used to be trails for different purposes and groups. For noble people, messengers, pilgrims and the one we went of used to be for runners, who delivered goods or messages. We had some great views on the valley and the river at the highest point and passed interesting looking and pretty flowers and vegetation. 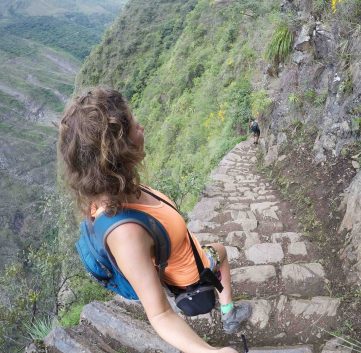 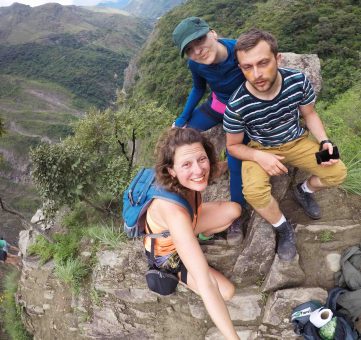 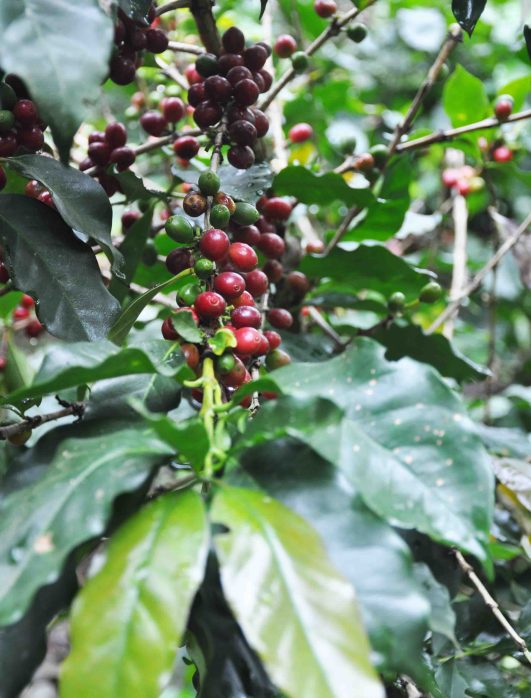 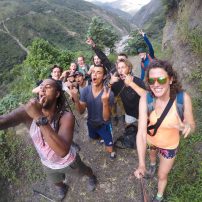 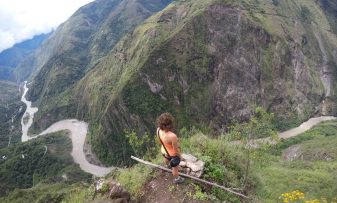 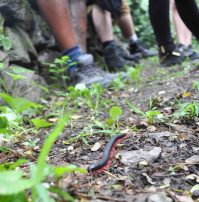 When we stopped at local family’s places they showed us what chocolate and coffee really looks like as plants and let us try home grown fruits and veggies. We also tried a sip of alcohol that was stored in a bottle together with a dead snake. The snake actually got drowned in alcohol. Quite disgusting but the liqueur tasted nice. 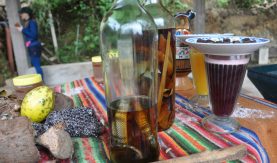 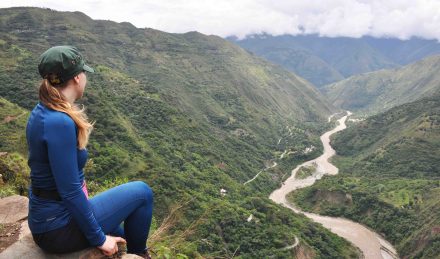 Roxana looking at the Urubamab river

They also had weird and super cute looking animals and I have no clue what they were (like monkey kind creatures, maybe one was a lemur?!). But they were just super super super cute and lovable. We could hold and pet them and they loved to get a belly rub. There were also monkeys but I don’t like monkey so they got ignored. 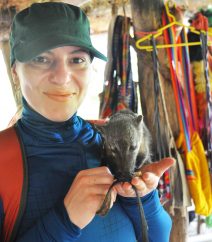 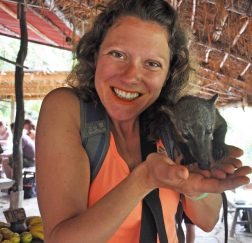 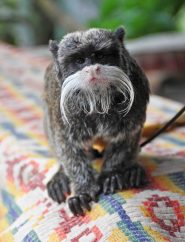 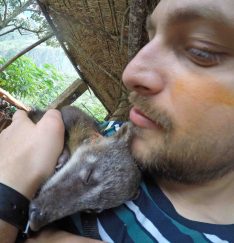 exhausted from all those tourists

The evening we spent in hot pools, very nice and relaxing but before that we crossed the river Urubamba on a cable car. Like, and open air cable car that fit three people and it was lots of fun. The hike itself has been awesome and it’s so nice to do it at an altitude where I can actually breeze and it’s easy going. Made such a change, it hasn’t been exhausting at all. 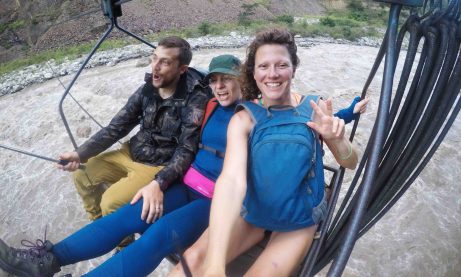 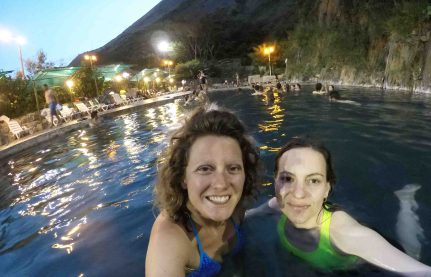 relaxing in the hot tub

Day 3 has been our lazy day. We went zip lining over the Urubamba river. Well, we is not quite right. They did. I went on the first (of five) zip lines but it wasn’t really fun. I guess dangling around in stupid heights on a carabiner is not for me. There wasn’t even any adrenaline or nothing. So I didn’t go any further. Another reason for me not to continue was the instructor, who barely spoke any English so we didn’t get important information about having to break ourselves (I ended up breaking too soon and had to pull myself onto the platform). Also when we asked him if people have died before on this zip line he just didn’t say “No” but indicated that there may have been the occasional incident – but with other agencies… After the zip lining we walked two hours to Aguas Calientes or Machu Picchu Pueblo where we stayed the night. The walk has just been along the trail tracks and although it hasn’t been the worst – it was nothing special… All in all, that wasn’t really my day. 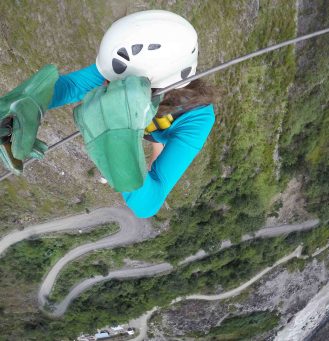 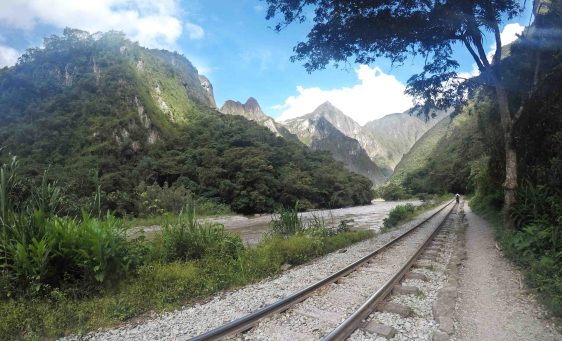 walking to Aguas Calientes along the trail lines

The last day of the trip has been the highlight of the tour: Machu Picchu. We got up at 4 am to hike up the the ancient Inca town – an ascent of 400 meters. We had to take our bags (my laptop has seen some things) and the rain has been pouring down. Up there I was wet, cold and sort of covered in a cloud. It was very frustrating to not being able to get a great view on a place I was looking forward to visiting for months. At 6:30 we joined a tour through the city. The weather seemed to clear up a little but it was windy, and I (still wearing my wet clothes) was shivering cold. It had stayed dry after all the rain during the hike so we changed clothes and walked around, explored. At the spot where one can get those picture postcard views it cleared up and I was finally able to see Machu Picchu from above, covered in fog around it – but the view was still decent enough. I was very grateful even though I skipped the hike up to Montaña Picchu due to the foggy weather… Now I have been to Machu Picchu, able to imagine how life may have been there, up on top of a mountain, surrounded by other steep mountains, fog, cold winds. How did people live there in their small houses, work on the terraced fields? What did they think and feel… 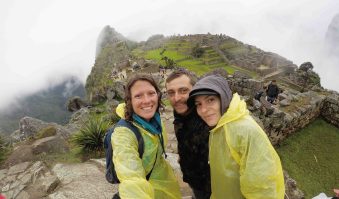 Arriving at Machu Picchu after a very rainy ascent 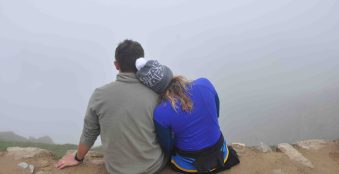 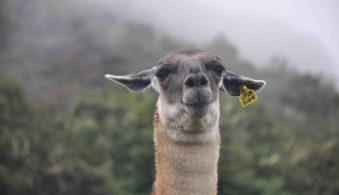 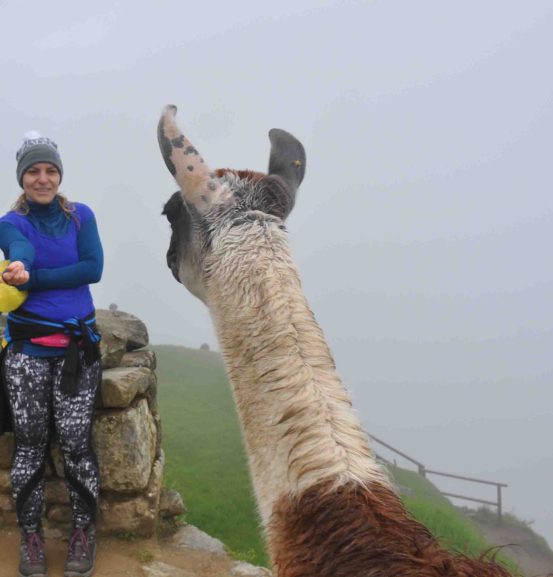 The city was built in the late 15th century, probably as an estate for the Inca emperor Patchacuti. It had around 700 inhabitants and has been abandoned 100 years later, as a result of the Spanish conquest. It is located about 80 km from the Inca capital Cusco, but had never been found by the Spanish. That’s why it’s never been plundered or destroyed. In 2007 it has been voted as one of the New Seven Wonders of the World. There are around 4000 to 10000 daily visitors. That day I have been one of them. 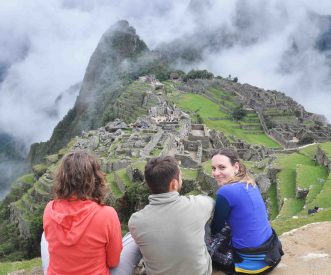 Roxana being concerend about the quality of that photo? 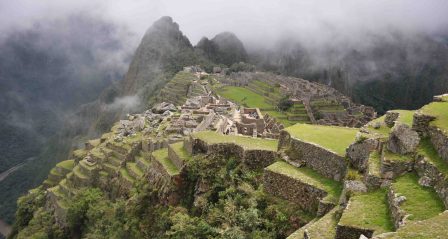 Very very pretty to look at 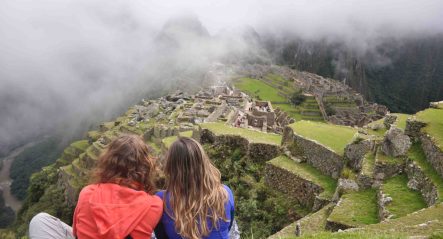 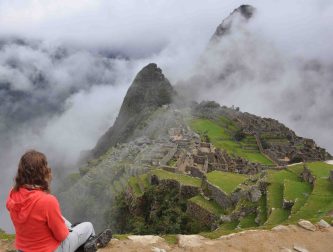 I am very grateful the views got abetter