I am definitely off the Gringo Trail here. I basically stopped here in Trujillo because it’s half way to Ecuador. I am sort of trapped here for 5 days – this is when the next bus offering cama seats will head up north.

When I got here at around 10 ish in the morning it was already hot and sunny. First thing I did for hours – chill out in my room with the fan on. It was glorious. When I walked to town I figured there is no one else. It’s a normal town, not many tourists (I saw 2 other tourists from either Europe or North America). The Plaza de Armas is surrounded by nice, colorful buildings and a pretty yellow church. I went to some place that said “Restaurante Vegetariano” and ordered the menú del día – without even reading what it is. When I got it I still didn’t know what it was. But there was meat on it. Or something that looked like meat. That place is so not-touristy – you go into a veggie place and get chicken. That place is also so not-touristy – some people stared at me and whistle after me out of their cars. Being “una rubia” (a blonde – basically a nick name for western foreigners) is definitely something I can’t hide here. After eating, ATM-hunting, strolling and tour-booking I went back to my room and watched “Lord of The Rings” in Spanish. A precious ending to a relaxed day…

Trujillo is known for many things. It’s considered “the cradle of liberty” due to its important role in the fight for freedom. It was the first independent Peruvian city and proclaimed its independence in December 1820. It is known as “Capital of Marinera”, a traditional Peruvian dance using handkerchiefs as props. It expresses the romantic courtship of couples and boy, apparently real courting contains very (very very) fast foot movements. 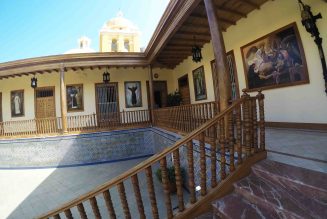 Trujillo is also known for its proximity two two major archaeological, pre-colombian sites: Chan Chan, the largest adobe city in the ancient world and “Las Huacas del Sol y de la Luna” – the moon and sun temples. Both belonging to two different cultures. The Chimu Culture (Chan Chan) and the Moche Culture. The latter flourished from 100 to 800 AD and had its peak around 600 AD. Bad periods of weather, likely to strong El Niño events with lots of rain around 600 AD led to the decline of the Moche Culture. During this time the influence of the priests declined while the civil and administrative power increased. The Chimu culture arose around 900 AD and flourished in the 14th century. Similarly, archaeological evidence (pottery) suggest that the Chimu emerged from the remnants of Moche culture. The site itself is stunning due to the fact that all the colors have more or less survived the past, say 1400 years. Why? Because the temple has been buried – the paintings haven’t seen any sun light until their discovery. Apparently temples used to have a life cycle – after that the Moche buried them and simply built a new on on top.

Another, even more exciting Moche site is El Brujo, an hours drive away from Trujillo. Here too, all the nice coloring and painting had lasted over the years but what’s even more interesting is the fact that they found tombs and mummified bodies. One of them being the Señora de Cao – a reigning queen, likely to be the most powerful woman in the historic Andean world. She died aged 25 to 30 which, back in the day wasn’t unusual but her body remained until in 2005 curious Archaeologists excavated her. She had been buried together with six other persons but – and here comes the sad part – noone knows who they were. Family, Random sacrificed people? Who knows? Unfortunetaly research is expensive and scientists here simply lacking money to discover more. Even worse, there are more temples in the close area. All undiscovered. Unlike the Huacas del Sol y de la Luna where four sponsors invest in research, the site in El Brujo currently only has one private sponsor. If you read this, being interested in history and really, really wealthy, check out what opportunities scientists would have to discover more pieces of that great culture, more precious gold ornaments, potteries and ancient weapens that are basically like new.. if, yeah if they just had a few millions more… It’s very exciting to think about what’s underneath those humps if you just scratch away the surface – I was tempted to get my shovel out right away… During the tour I understood a lot, maybe as much as never before. The guide was Spanish, maybe that’s why. To me it’s like a miracle that I can actually get what’S going on and interact with people speaking a language I have never really learned. It literally amazes me all the time.

They liked to sacrifice people to the Gods

cool paintings that survived the past 1400 years

My last two days in Peru I spent at the surfer’s hot spot Huanchaco. The waves are gigantic, the sunsets pretty and my hospedaje (B&B) and the hosts are awesome. As a bonus they have a kitten that likes to play with its tail on my bed and is climbing into my back pack right now. I am basically their only guest and it feels like living here in a fancy house with pool. The town itself is average and unspectacular. I broke my flip flops, bought some chips that tasted like shit, lost 20 bucks and the orange I bought yesterday had mold on the peel. Great. But today after the tour I finally found a restaurant that serves tasty food without meat. That region here has a specialty called ceviche, a popular seafood dish. They basically serve nothing else here. I can ask for veggie food but last time I did I got some salad, two potato like things and plain rice… Today I got french fries, veggie in awesome spicy sauce and as desert I bought some home made cake. I am a happy camper right now with a full tummy.

I will pack her in and take her home

In 3 hours I will be boarding a bus that will take me out of Peru and into Ecuador. My last three weeks in South America I will be spending there. One more blink and this trip will be over…

im so out of shape